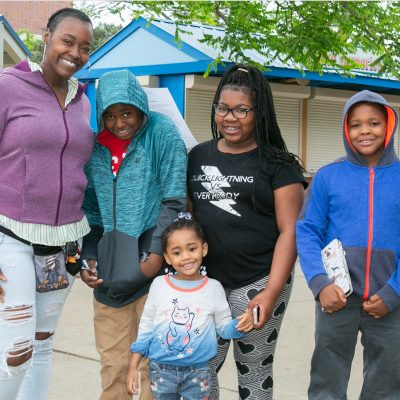 In 2006, Faith found out she had non-Hodgkin’s lymphoma while she was nine months pregnant. She felt two bulges in her neck, and her mother, who is a nurse, encouraged her to make an appointment. Two days later, after she left the Henry Ford Cancer Institute, she had her son at DMC Hutzel Women’s Hospital. While there, they ran extra tests and uncovered the blood cancer was in her neck, chest and pelvic area. Immediately after her discharge, Faith was in the hospital an additional two weeks so she could start treatment.

Since, Faith’s cancer has come back three times. In 2015, she underwent aggressive chemotherapy, radiation and a bone marrow transplant, and after being in remission for six months (in 2017), her cancer returned as Hodgkin’s disease. While her treatment this time solely consisted of radiation, it was the scariest because she had to go every day for a month.

Faith has been with BCFM since her first diagnosis. She was introduced by her oncologist and hospital social worker, halfway through her treatment. Over the past 14 years, BCFM has provided Faith with important emotional support check-ins, many valuable resources (including Stepping Stones, BCFM’s 150-page disease-education and support binder, and other informative books), as well as opportunities for her family to get out and meet others going through similar circumstances.

Her family has been attending BCFM events since her oldest child was born.

“I appreciate the kindness The Blood Cancer Foundation of Michigan gives to people in need – they are friendly, open and go above and beyond to help,” said Faith. “It is incredibly comforting to know that I am not by myself in this. We can all lean on each other.”