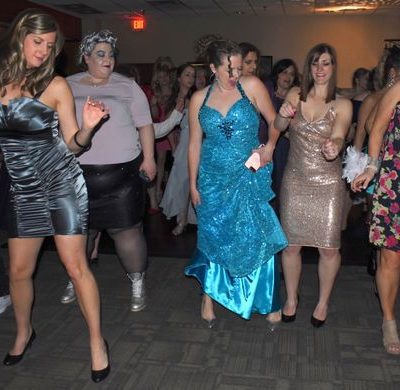 Betsy Crapps will tell you she doesn't deserve the credit for Mom Prom. She says the idea came from the Holy Spirit, and she was just sort of singing along.

What this suggests is that No. 1: Crapps is probably too modest, and No. 2: the Holy Spirit likes to shake it down.

The original Mom Prom in 2006 was Crapps and 11 friends from Canton Township, going to dinner at a Buca di Beppo in their ghastly prom and bridesmaid dresses and then overrunning a dance club in Plymouth.

Shimmy forward 13 years, and Mom Prom has been featured in newspapers in France and Kuwait and on the Australian version of "Today." A screenwriter is shopping a Mom Prom script to producers, and someone else is talking up a docu-series.

"Every so often, it hits me," Crapps says. The microphones, the cameras, the friendships, the good causes: "Do I realize what's happening?"

Crapps expects 120 Mom Proms to rock ballrooms and church basements in 39 states, Canada and possibly Guam — with every giddy, goofy one of them raising money for charity.

How much money is a difficult question to answer, almost as difficult as "Why do women hold on to horrendous old dresses?"

The year's take for Mom Prom beneficiaries will be well into six figures. As for the grand total, from all the proms and all the moms with their poufy purple gowns since 2007, $3 million is probably low. Among the things that tells you:

There are a lot of good and whimsical women in this great land.

There are even more bad dresses.

The 14th incarnation of the original Mom Prom — the mother ship, if you will — was April 13 at Fellows Creek Golf Club in Canton Township. That was the same night as Mom Proms in South Lyon and East Tawas, and also Saratoga, New York; Williamsport, Pennsylvania; Marysville, Washington; and Appleton, Wisconsin.

The first incarnation of the Brighton Mom Prom, meantime, will be May 18 — the same night as Stanton, Michigan, Seattle and Fredericksburg, Virginia — and the basics will be identical.

Fun. Frivolity. Rampant dancing. Advil. No men, unless they're working or you count the cardboard cutouts of movie stars at the photo booth. Awards for outrageous hair, tackiest dress, maybe most glamorous. The crowning of a queen, decided at Crapps' proms by a combination of luck of the draw and the rolls of huge pink dice.

There are mother-of-the-groom dresses, borrowed dresses, Salvation Army dresses. One year, Crapps says, a woman who could no longer fit into her prom or bridesmaid dresses sewed the two of them together. Easy winner. This year, a Ford engineer who uses a wheelchair rocked and rolled all night, and so did a newcomer who didn't know a single other guest.

Smithpeters, 65, spent four days in the kitchen, then three hours on the dance floor.

And for those who aren't? Those whose preferences, rather than their boogie-impaired  husbands, are what always keep them in their seats?

No problem. "If you don't want to dance," Crapps says, "you can just sit and make fun of the gowns."

Prom with a purpose

The former Betsy Paulsen, 49, has moved from Canton Township to South Lyon since starting the Mom Prom revolution. She has three kids, a rescue mutt named Buster and enough of a sense of humor that she didn't even consider keeping her maiden name.

Once a Brother Rice High School history teacher, Crapps is the director of faith formation at St. Thomas a'Becket Catholic Church in Canton Township, where Mom Prom moved in 2007 when it occurred to her that hilarity could serve a higher purpose.

Eighty women paid $10 apiece to dance in the gym that year, and she passed along $800 to a homeless shelter. Two Saturdays ago at Fellows Creek, 180 guests paid $40, and after writing checks for the DJ, photo booth and hall, she gave $4,000 to the Children's Leukemia Foundation of Michigan.

One Mom Prom in Virginia raised $80,000 for a children's hospital. Crapps has considered moving hers to a casino and shooting for 2,000 paying customers but ultimately decided to keep things simple.

"I feel like my gifts are in helping set them up," she says.

In Brighton, for instance, Carrie Hastings is trying to create Prelude Home, a residence for divorced or otherwise displaced women. Her daughter suggested a prom for moms, and Hastings wound up connecting with Crapps.

"We didn't know Mom Prom existed," says Hastings, until Google told her so.

"I love what you're doing," Crapps told her. "Please feel free to use our name."

"Mom Prom" has been trademarked since 2011 and is a registered 501(c)(3). The board members are Crapps, her sister-in-law and her husband, Wally, whom she met when they were sophomores at Notre Dame.

She can't recall her official title and nobody takes a salary, which makes sense since there's no income. The cost to employ the Mom Prom name is zero, and the requirements are simple: sign the trademark and licensing agreement, use the pink-and-purple logo and give the proceeds to charity.

A sensible male friend advised Crapps years ago to charge a $100 licensing fee. She declined. Many of the proms are personal to the promoter, and they become personal to Crapps as well.

"I'm not going to charge money," she says, "to a woman whose son has brain cancer."

Hastings' nonprofit was inspired by her tailspin after a divorce seven years ago when she was 50. She found a "Dynasty"-worthy black dress at a thrift shop and hopes to sell 300 tickets to her prom at Mt. Brighton Ski Area for $40 each.

She had printed her fliers before she found out Mom Prom was someone else's baby. Chastened, she offered to re-do them with the logo.

"Don't waste your money," she said.

An idea is born

Depending on how deep you want to dig, Mom Prom's roots go back to either the passing of Crapps' father 20 years ago or a friend's Oscar party in 2006.

Widowed at only 58, Kathy Paulsen downsized from a house to a condo back in Rochester, New York.

After the move, Crapps says, her mother drove to Michigan for a visit, "and I still remember watching her get out of the car holding my prom dresses, thinking, 'What am I going to do with that junk?'"

There were three of them: light blue from her sophomore year, followed by teal with a big hoop skirt and pink with puff shoulders. They hung ignored, except when her daughter played dress-up with the hoop skirt.

Then Kirste Moline from the mom's group at St. Thomas a'Becket invited some friends over to watch the Academy Awards.

Crapps recruited her neighbor, Jen Edmunds, and at a gathering where most people were relaxing in jeans or sweatpants, they sauntered in like the belles of a 1980s ball. She wore the teal number, Edmunds a red bridesmaid dress with disco ball earrings.

"Where's the red carpet?" Crapps asked. The moms dissolved. A few months later, a swarm of them descended on the Italian restaurant, and Crapps was on her way to moderate fame and no fortune.

Associated Press covered the 2011 Mom Prom, and the story popped up on at least four continents. Crapps is blessedly comfortable on camera, but when "Good Morning America" put her on the air that year ...

Well. That was daunting. Then she glanced at the daily Bible verse an app delivers to her cell phone, and it was Matthew 5:15-16: Do not put your light under a bushel, "but on a candlestick; and it giveth light unto all that are in the house."

Light, and in her case laughter, plus cash.

The only year Crapps tried to keep track of all the money raised was 2013. There were maybe 60 events nationwide, half the number for 2019, and when you're dealing with three kids in travel soccer you don't have time to pester all the proms for final numbers.

Consider the increase in Mom Proms, adjust for the growth in revenue that comes with experience, remember to count the proms from 2007-12, and the $3 million aggregate becomes entirely plausible.

The rescuer of the gown

At this point, Mom Prom is old enough to have traditions, and one of them for Crapps is that she always wears the pink dress to her own dance.

For the record, that's the favorite of her dry cleaner.

Ann Marie Rockov and husband Mark own Park Avenue Cleaners, close enough to St. Thomas a'Becket that you could hit it with a corsage. It's become the unofficial Mom Prom rescuer of beaded, befouled or just plain elderly gowns.

"Women come in, all excited, and act like it's their first prom," Rockov says — even if they're presenting a stain that's the residue of last year's exuberance.

She understands. She's been to multiple Mom Proms, and "you can take your shoes off and dance. Just let loose."

Crapps' shoes stay on, but that's only because she wears purple low-top Converse sneakers.

Many others begin the evening in heels, but few end it that way. Some proms even sell flip-flops as a fundraiser or get them sponsored.

Crapps offers that sort of insight to anyone who asks, and the questions come with regularity. Often, that means eating lunch at her desk while she deals with Mom Prom emails.

Be forewarned, she'll say: If a group of you go to dinner before the dance, complete strangers will take your picture. What they do with the photos remains a mystery, but it's all part of the adventure that comes with the clothes.

"It's kind of weird to say I wear prom dresses," Crapps concedes. But it's kind of cool that they still fit, and even more cool that she's made thousands of other people want to wear them, too.

Thank goodness the spirit moved her — whether it was truly the Holy Spirit ... or just the spirit of Duran Duran.

View this story on the Detroit News.