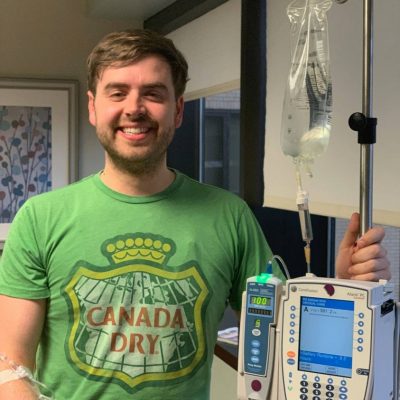 Two years ago, Eric Dresden spent all Friday morning at the eye doctor. After several tests, he heard, “this is weird.”

Eric couldn’t see well at all. It took hours for his eyes to adjust to light. Sometimes just turning on the lights in the morning caused his eyes to water uncontrollably. “It’s just stress. It will figure itself out,” he kept telling himself. But, it didn’t.

Hours after the first eye tests, he was sent to another retina specialist, and then a lab to get blood work to “test for anything and everything.”

After the tests, Eric came home, napped and woke up to a call from the retina doctors, who informed him that his white blood cells were more than 1,600% higher than average and that he should go to the ER immediately.

Eric woke up the next morning to several doctors walking into his shared room: “We believe you have a form of leukemia. The good news is that it’s very easily treatable via a pill a day.”

Eric’s blood had mutated. It wasn’t passed down through generations or something he was exposed to. In fact, doctors couldn’t pinpoint one exact reason Eric was diagnosed with Chronic Myeloid Leukemia.

As Eric went to pick up his pills for the first time, he talked with one of the doctors about his upcoming wedding in six months. “You know, 20 years ago, if I were diagnosing you with this, I would’ve told you to cancel your wedding and that you’d be putting your money toward your funeral,” he said.

Because of dramatic, impactful science and research into cancer and blood cancer, a daily pill called a TKI takes care of the severe issues with Eric’s blood. While he'll likely live forever with CML, he’ll do just that…be able to live.

As Eric searched for support, he found BCFM online. He’d donated before to benefit the organization in support of others, and here he was searching for himself now.

While his diagnosis was, to him, not very severe, he learned more about others diagnosed with more dangerous blood cancers, while also navigating the shock, the financial implications, and coping with a significant change. All of it can begin as inexplicably as a simple Friday morning visit to the eye doctor. Either way, he firmly believes that anyone navigating a blood cancer diagnosis needs an experienced navigator like BCFM’s Patient Support Specialists – to help keep even the most steadfast person stable as they face these diseases.

Turn the page to start 2021, Eric was nominated to join BCFM’s Board of Directors.

Reminded that we’re all just one diagnosis away from a crisis, he is honored to support the work BCFM does with patients and families so they can focus on treatment and remain stable through their diagnosis. And, he invites the community to join him in empowering the thousands of patients and families across Michigan who are feeling out of control and helpless by giving today: bloodcancerfoundationmi.org/how-you-can-help/donate-now/.